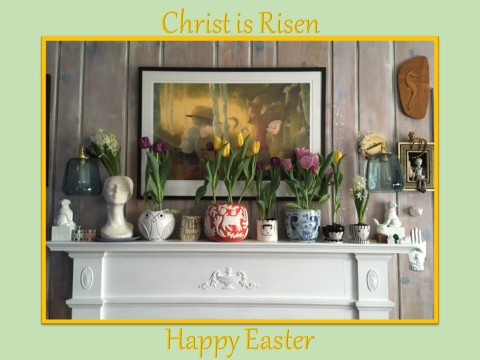 “They have taken my Lord away,” she said, “and I don’t know where they have put him.” 14 At this, she turned around and saw Jesus standing there, but she did not realize that it was Jesus.

Thinking he was the gardener, she said, “Sir, if you have carried him away, tell me where you have put him, and I will get him.”

She turned toward him and cried out in Aramaic, “Rabboni!” (which means “Teacher”).

At the Cross her station keeping,
Stood the mournful Mother weeping,
Close to Jesus to the last. 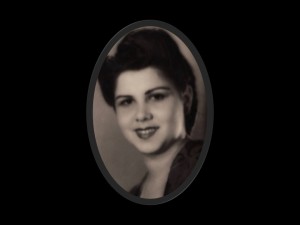 One hundred years ago today my mother came into this world making a dramatic entrance. A foreshadowing of the remarkable woman she would become. At 22 she married my father.

When I, the youngest of her four children, was a year old she opened a beauty shop (Salon de Belleza Glamour). Her talent and enterprising nature made it a great success.

After the Bay of Pigs invasion, she and my father decided to send the four of us to the U.S. to escape the Castro regime and to later join us.  One month later my father died.

Five months after, she was finally able to join us in Wisconsin. She bravely took on the responsibility of providing for four teenagers in a new country and learning a new language.

Life brought her joy and sorrow. The joy of seeing her children grow up to be responsible adults, get married, have children of their own. The sorrow of seeing some of those marriages end, of losing her first granddaughter at age 5 and both her sons at ages 47 and 58 before she died just a few weeks short of her 85th birthday.

She was a gifted storyteller with a great sense of humor and could bring life to any gathering. The memories of her anecdotes and wise sayings still amuse those who had the pleasure of knowing her. Her cortaditos were legendary and I was fortunate to share the last one she ever made. She could often drive me crazy, but I still miss her every day.

People who knew still laugh remembering her stories and She did take time to drive us crazy now and then, but my sister and I still miss her tremendously. 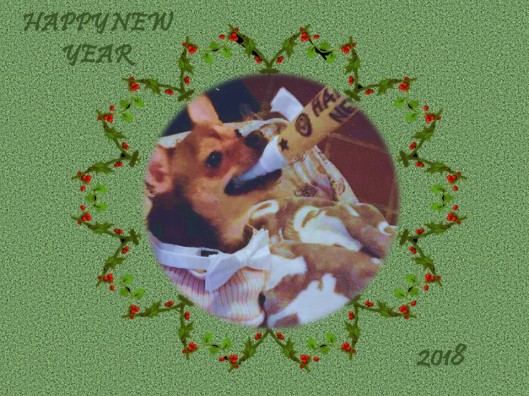 May the year bring blessings and peace to this troubled world!

The year 2017 comes to an end. On this last day of a pretty eventful year I am amazed once more at how much nonsense the world can take and still survive. I am not sure what will happen in 2018, but it will be interesting to see what new madness it will bring. If it weren’t for all the tragic events, it could be amusing. I pray that God continues to protect and love us and overlook our insanity. 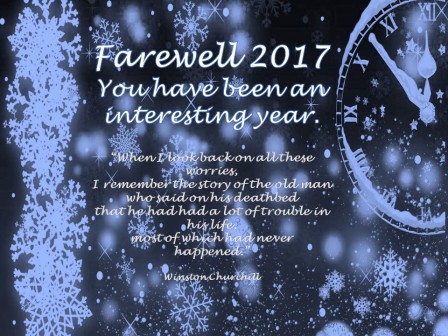 We celebrate Juan Diego’s first birthday today. He has been a blessing that brought joy and laughter into our lives. The cutest and sweetest little Chihuahua who continues to charm us daily. HAPPY BIRTHDAY JUAN DIEGO!!!!

“And the Word was made flesh, and dwelt among us”

Christmas Mass at the Crypt Church at the Shrine

May we keep the joy and wonder of Christmas in our hearts throughout the year!

The Spanish Christmas carol “Arbolito” brings memories of warm clear nights of Christmas Eve in Cuba. The excitement of the feast to be consumed, the gathering of family and friends and a feeling that all was well in the world. No anticipation of gifts since those would not come until January 6. The thought of Jesus being born filled my heart with joy.

Santa Claus came into my life at age 13, my first Christmas in the U.S. I had heard of the jolly old fellow but we did not incorporate that tradition into our Christmases. As long as we don’t lose sight of the real meaning of Christmas, I think there is room for the whimsical celebrations.

MERRY CHRISTMAS TO ALL AND TO ALL A GOOD NIGHT!

Preparing for the celebration, shopping for gifts, stressing to make sure everything is ready should not take precedence over our spiritual preparation. Getting ready to celebrate our savior’s birth should be our priority and we must never forget our guest of honor.

One of my favorite Advent rituals is the Advent wreath.

This year we were able to see an exhibit of Nativities from around the world at the Franciscan Monastery. 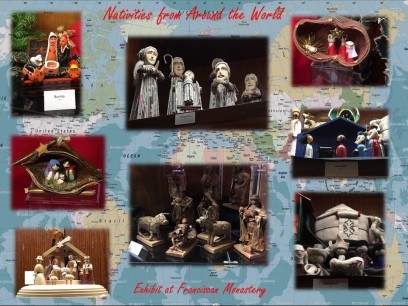 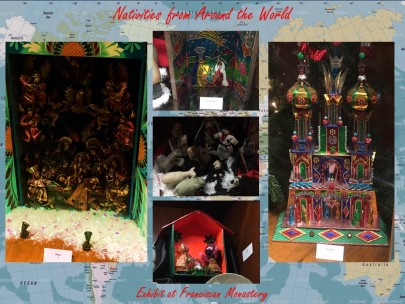 I was surprised to see one from Cuba.

We are blessed to live so close to The National Shrine of the Immaculate Conception. It is a wonderful place at this time of the year. We attended the Blessing of the Bambinelli and had the Baby Jesus from my 46 year old Nativity blessed. 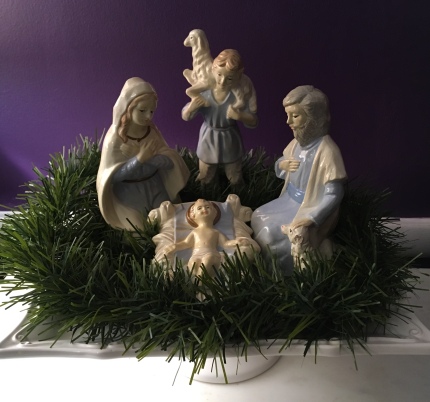 Pictures from the Shrine as they get ready for Christmas: 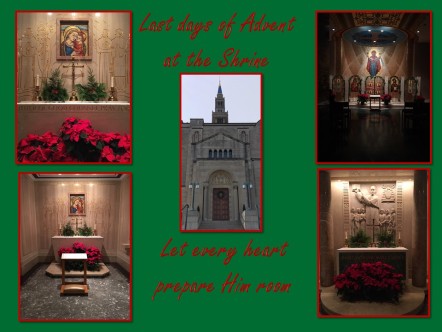 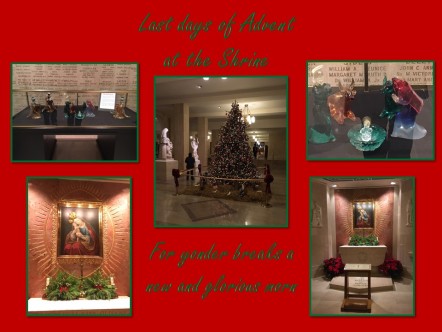 Is the Mistletoe politically incorrect now? The legend which sparked a kiss under the mistletoe is based in the purest of loves – that of a mother for a child. It is the legend of Goddess Frigga and her son Balder.

Frigga was the Goddess of Love and her son, Balder, was the God of the Summer Sun. Once, Balder dreamt of his death. He was obviously worried and told his mother about the strange dream. Frigga was worried not only for the life of her son but also for the life on Earth because she knew that without Balder, all life on Earth would come to an end. Thus, she did her utmost to avoid such a mishap by going everywhere and appealing to every being in air, water, fire and earth, to promise her that they would never harm her son. She was promised the safety of her son by every animal and plant under and above the Earth.

However, Loki, the God of Evil, who was an enemy of Balder and always had evil designs in his mind, was aware that there was one plant that Frigga had overlooked. It grew on apple and oak trees and was known as Mistletoe. Thus, Loki made an arrow and placed a sprig of this plant at its tip. He then beguiled Hoder, the blind brother of Balder and the God of Winter, and made him shoot this arrow at Balder. Balder immediately died and everybody was worried as the Earth turned cold and life became dreary. For the next three days, every creature tried to bring Balder back to life but he was revived only by Frigga and with the help of mistletoe. Her tears on the plant became pearly white berries and she blessed it such that anyone who stands under the mistletoe would never be harmed and would be entitled to a kiss as a token of love.

Mistletoe as a Christmas symbol

Mistletoe is an aerial parasite that has no roots of its own. It lives off the tree to which it attaches itself and, without that tree, it would die. Mistletoe is a Christmas symbol of our love which derives from and exists only because God loves us. God, Who is Love, created us in love and caused us to be able to love. Christians are humbled before these words of St. John the Evangelist: “God is love, and he who abides in love abides in God and God abides in him” (1 Jn. 4:16). Just as mistletoe may not acknowledge the tree which sustains it, so people may not acknowledge that the love of God sustains them. But if mistletoe were taken from the tree and any person removed from God’s love, both would die.

Let’s not sully this tradition with the madness of today’s society.